This is data for Sunset’s too late on Halloween.  See that post for a fuller explanation.

I didn’t get my first trick-or-treater today until 6:53.  This was late enough that I was starting to wonder if any would come, despite this being our second year in this house and having gotten plenty last year.

But I live in Atlanta, where sunset today came at 6:45 because:

I think the powers that be are enemies of fun.  I told my mother this and she said that she remembered not being allowed to go out to trick or treat until it got dark.

But is this 6:45 sunset late?  It seemed like it, so I tracked down a list of cities and the maptools R package (which, among other things, can compute sunrise and sunset times) and got to work.  Here’s the result: 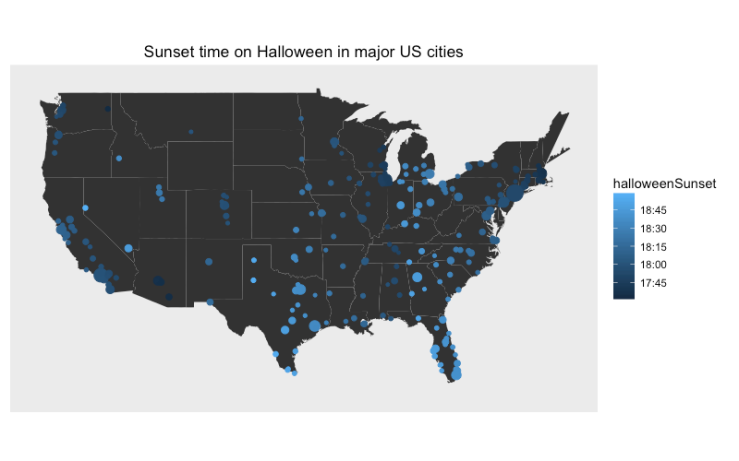 Lighter shades mean later sunset.  You’ll notice that one of the lightest shades is, indeed, the one for Atlanta.  There are 239 cities represented here; of these, only 17 have sunset times later than Atlanta tonight.   Full data is in Sunset times on Halloween for major cities.

The latest sunset time in a major US city tonight is 6:58 PM in Reno, Nevada.  The earliest is 5:32 PM in Spokane, Washington, which is that barely visible dark blue dot out in eastern Washington by the Idaho border.

I grew up in Philadelphia, where the sun sets at 5:58 tonight, and would have set at around 4:58 on the Halloweens of my youth. (I spent significant time in Boston and San Francisco, where the sun sets on Halloween at 5:38 and 6:11 respectively.)  So we’re off by almost two hours from what I “expect” from my formative years.  It also got up to 86 degrees today.  No wonder everything feels wrong.

An interesting article bobbed up from the ocean on Twitter today: Stan Ulam, John Von Neumann, and the Monte Carlo method, by Roger Eckhardt. This was in the Los Alamos Science Special Issue of 1987, which was dedicated to Stan Ulam. The whole issue looks quite interesting, as does indeed much of the whole publication, which was the flagship publication of the Los Alamos National Laboratory from 1980 to 2005. I suspect the articles on history would be a good place to start.

The article starts out with the now well-known story that Ulam invented the Monte Carlo method while trying to work out the win probability of a particular solitaire game, and indeed that probability has been worked out by simulation!. (Wikipedia cites the Eckhardt article, which is probably the original published source as Eckhardt only cites unpublished notes left by Ulam.)  The original scientific problem to be solved was one about neutron diffusion, which gives the Los Alamos connection.  There are also some nice inclusions of letters between Ulam and von Neumann.

Josh Barro observed on Twitter: “A single poll finding Trump up 30 in Oklahoma moves the national 538 forecast by 1.3 points. Seems… sensitive.”, and linked to 538’s page.

This got my attention, because I have been watching 538 a bit more closely than I’m proud of. I agree that this does seem sensitive. A lot of the comments here seem to explain it by saying that the move in Oklahoma implies moves in other more competitive states that Oklahoma results are historically correlated with (such as Texas?), and the model is picking up on this.

Each of these results is based on 20,000 simulations of the election; thus we’re looking at differences between noisy data.  However all three of fivethirtyeight’s models moved in the same direction at this time, according to the (unofficial) FiveThirtyEight forecast bot:

So what’s going on?  To take a quick look at this, let’s look at the last 50 updates in which all three forecasts moved (sometimes there’s a change of 0.0).  By my count, 29 of them had all three forecasts moving in the same direction, while the forecasts have been roughly flat over that time.  If the forecasts were uncorrelated, then we could think of the direction of the moves as just random flips of a coin, and one-fourth of the moves would have either three ups or three downs.  So by this simple test, the moves appear to be correlated.  In the spirit of Averaging All The Things that pervades FiveThirtyEight, perhaps the “true” motion was the average of the motion in the three models, 1.5 or 1.6 percent down.

So it seems quite reasonable that that move is “real” – at the very least all three models bear show it.  But why? There’s at least one large move based on other single polls.  Looking at the history of updates, we find this move, less than an hour ago as I write this, based on a poll that shows Nevada at Clinton +6 when the model had Clinton up by 4 previously:

But most big moves come from several polls coming in at the same time, and in more significant states. I think the real lesson here is that obsessive poll-watching is exhausting…

Barcelona-based independent publisher Kronecker Wallis is putting out a reissue of Newton’s Principia with very good graphic design.  (Link goes to Kickstarter, but it looks like the plan is to sell it through normal channels as well if this Kickstarter, well, kickstarts it.). 45 euros including shipping, a good deal for an object of this quality.

I’m reminded of Byrne’s graphical Euclid, although this is not the same sort of project – Byrne replaced the text with graphics, and this is about making the text look good and be a pleasure to hold and read. Are there any other similar editions of mathematical classics? (Given our history of neglecting our history, I’m not particularly hopeful, but would love to be proven wrong.)

While looking for something for work (!), I came across an interesting set of PowerPoint slides How to predict election results from Jan-Michael Frahm at UN . This nicely summarizes the methodology of the 2012 iteration of Nate Silver’s election forecast at FiveThirtyEight. The 2016 iteration is explained here but is largely similar.

If you like these sorts of models, there’s also Sam Wang (Princeton Election Consortium), Josh Katz (New York Times / Upshot), and Huffington Post, Daily Kos PredictWise is David Rothschild’s site which aggregates results from the prediction markets. Slate has been running a feature on Trump vs. Clinton: Who’s Winning Today’s Forecasts of Who Will Win the Election?, which is a bit tongue-in-cheek . They average the other forecasts. As they tell us, “averaging is a sophisticated econometric technique that combines addition and division”.

The slides come from a course COMP 066: Random Thoughts at UNC, a first-year seminar in the CS department which is as far as I can tell intended for non-majors, which is described at the epartment’s web page as follows: “explores the notions of “randomness” and its antithesis, “structure.” What does “random” mean? How do computers generate “random” numbers and just how random are they? Is the addition of random noise to a signal always bad? (The answer is no!)” I would have liked to teach a class like this back when I taught (or for that matter, to take such a class back when I took classes).

. There’s a plaque (you should always read the plaque), and a few years back John Baez posted some pictures. Maynooth University does an annual Hamilton Walk retracing his steps on this day, which you missed, but there’s an audio guide.

Circle packing is made harder by the following constraints:

Bill Clinton: “if you don’t vote, it’s half a vote for the other guys” – just heard on CNN at a campaign event.

This is a property of elections that hadn’t occurred to me. The quantity Clinton cares about is C – T, where C is the number of votes for Clinton and T the number of votes for Trump.If this is positive, Clinton wins; if it’s negative, Trump wins.  If you vote for Clinton, that goes up by 1; if for nobody, it doesn’t change; if for Trump, down by 1.  So not voting is makes this margin one less than Clinton would like; voting for Trump makes this margin two less.  Hence, half a vote for the other guys.