From the department of semi-useless plots: Wikipedia’s Major U. S. City Commute Patterns, 2006 plots the share of people commuting to work by public transit against the share of people commuting to work by car for major American cities. But most of the points in this plot fall pretty close to a straight, downward-sloping line, as you’d expect, because these are in most places the two most common ways to get to work and they should come close to adding up to 100%. But in actuality they generally add up to less than 100% because there are pedestrian commuters and bicycle commuters.

I say this plot is semi-useless because there are two dimensions and really only one is used. I suppose it could be called “semi-useful”, if I were more optimistic.

Can we do anything else with the same data? I don’t have the original data from which the plot was generated, but the good people at carfree census have some similar data. The link there gives the proportion of commuters who bike, walk, and take public transit in each of the top 50 cities. (Unfortunately it’s from the 2000 census; a lot more people are biking now, The Wikipedia chart includes only 31 cities; I’ll admit that I expanded to 50 so that I could include Oakland, where I live.)

Here’s one example which does reasonably well at spreading out the points into two dimensions and also has good ways of interpreting the x-axis and the y-axis.

On the x-axis plot the logarithm of the proportion of commuters who get to work by means other than driving. 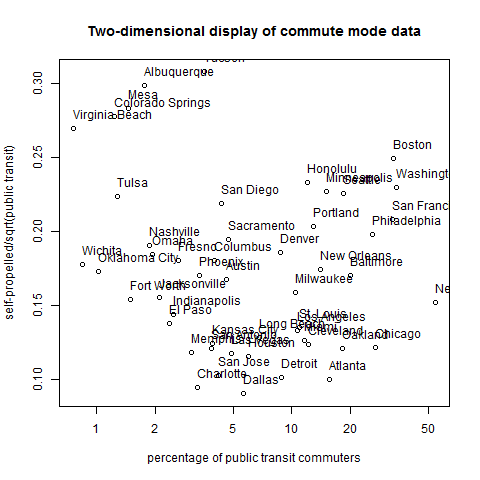 Note that, strictly speaking, it could be constructed from the Wikipedia plot by suitable stretching. (Since the two are actually generated from slightly different data this might not be apparent from looking at them.) I’m not sure what to make of it. In particular interpreting the y-coordinate seems tricky. In the upper left we have Virginia Beach, Colorado Springs, Mesa, Albuquerque, and Tucson as cities with low public transit and high rates of self-propelledness for their transit rate; in the upper right we have Boston, Washington, San Francisco, and Philadelphia as cities with high public transit and high self-propelledness for their transit rate. But what do these two groups of cities really have in common, and how do they differ from cities at the bottom, with low self-propelledness  rates compared to their transit rates, like Charlotte, Dallas, Detroit, and Atlanta? I leave answering this question to the city planners.