Which country wins the Olympics? Right now China is in the lead for most medals (73: 34 gold, 21 silver, 18 bronze) and most golds. The USA is second in both categories (71: 30 gold, 19 silver, 22 bronze). In 2008 there was some controversy about whether the ranking should be done by largest total number of medals or largest golds; here’s the table from Wikipedia. If I recall correctly (though it’s surprisingly hard to search for this) non-Americans were saying that the “right” way to do it is by golds, but Americans insisted on doing it by total medals. Not surprisingly the USA had the most total medalists in ’08 (110, to China’s 100) but not the most golds (36, to China’s 51).

But it hardly seems fair to expect, say, France to get as many medals as the USA, simply because they have about one-fifth the population. Shouldn’t their 41 medals in ’08 count for something? In fact they beat the US on a per-capita basis. In the current (2012) Olympics, as of two days ago Slovenia led the medal table per capita, says the New York Times. (This actually isn’t a case of a small country winning one medal; the Slovenes, at that point, had four medals for their two million people.) Medals per capita has up-to-the-minute data; as of this writing New Zealand (one medal per 443,262 people) has pulled ahead of Slovenia, and Grenada (110,821 people; one medal) is in the lead and is quite likely to stay there. Historical data is available as well; since 1984 it’s always been a very small country in the per-capita lead.

But per-capita counting is probably a little bit too aggressive in adjusting high-population countries downwards, because there are some events that have a limit in number of competitors per country. Team sports come to mind; there’s no way the USA will win more than two medals in basketball, despite its dominance. (Of course I’m trying to prop up the USA here! The site’s creator, Craig Nevill-Manning, is a New Zealander.) We could do regression to determine how many medals we’d expect a country of a given size to win, and then judge countries relative to that benchmark.

So here’s a way to put a partial order on countries: country A is “better” at the Olympics as country B at the Olympics if A wins more medals than B and has smaller population. We can plot the medal counts in a scatterplot — see below. The “winners” of the Olympics — and there are many — are all the maxima under this partial order, that is, all the countries for which no smaller country got more medals. Winners therefore include the lowest-population country to win a medal — in ’08, that was Iceland — and the country that won the most medals — that is, the USA. Intermediate between them, in 2008, were the Bahamas, Jamaica, Belarus, Cuba, Australia, Great Britain, and Russia. On the scatter plot below, these are those countries for which, if you draw a vertical line and a horizontal line through the point representing them, there are no points in the upper left quadrant; I’ve drawn those lines for Australia. 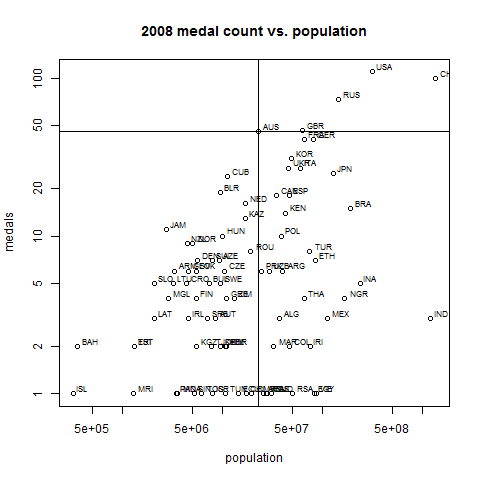 So far in 2012 the leaders in this category are China, the USA, Great Britain, Australia, Romania, Hungary, Slovenia, Estonia, and Grenada. (But don’t read too much into the differences between these lists, especially at the small-country end; during the Olympics such a list will be biased towards countries that happen to be good in events that happen early on.) I’ll put out the final results once the Olympics end.

Edited to add, 12:29 pm: in this 2012 New York Review of Books article on the pursuit of medals, I found a link to this 2008 Wall Street Journal article on differing schemes of ranking countries, namely the gold-versus-total-medals debate.

13 thoughts on “Who wins the Olympics?”